The Relationship Between Substance Abuse and Eating Disorders

Research has shown a strong relationship between eating disorders and addiction. Addressing them as co-occurring disorders can result in more effective treatment.

What Is an Eating Disorder?

An eating disorder is a serious mental health condition that can lead to severe health complications. People with eating disorders experience maladaptive thoughts about eating, food, weight, appearance, nutrition and health. These thoughts may lead to dangerous behaviors with severe and life-threatening consequences.

Eating disorders are not a person’s choice about how they live, eat or exercise. An eating disorder is a serious medical illness that can lead to many severe and dangerous problems, such as:

With bulimia nervosa, a person will repeatedly engage in binge eating. After the binge, they do something to counteract the food consumed during the binge. They might induce vomiting, use laxatives, fast, restrict food intake or exercise heavily. A person with bulimia nervosa may be overweight, underweight or an appropriate weight.

When someone has anorexia nervosa, they try to avoid eating, severely limit their food intake or only consume minimal amounts of specific food choices. They typically ruminate on their body and weigh themselves frequently. They often have a distorted sense of appearance and see themselves as weighing much more than they do. People with anorexia nervosa can die from the medical problems that develop. There is also a high risk of suicide.

In 2003, the National Center on Addiction and Substance Abuse [CASA] at Columbia University released study results identifying commonalities between eating disorders and substance use disorders.

The study also identified common characteristics among people who have eating disorders and substance use disorders, including:

Statistics show that these common characteristics and risk factors lead to a high co-occurrence of eating disorders and substance use disorders:

The Role of Substance Abuse in Eating Disorders

Someone with an eating disorder might be more likely to develop a substance use disorder because:

When someone engages in substance abuse or has a substance use disorder, they may develop an eating disorder due to the following:

Researchers have looked at other reasons to explain this high co-occurrence rate. Some theories have explanations, including:

Two subtypes of anorexia nervosa exist. When someone has the restrictive subtype, they place extreme, and often dangerous, restrictions on their food intake. With the binge-purge subtype, a person will restrict their food intake but also have occasions of binging. After the binge, they take measures to purge the food, possibly by inducing vomiting or using laxatives to compensate for overeating.

People with anorexia have the lowest rates of substance use disorders (SUD). Approximately 12%–18% of adults with anorexia have a SUD. Research has shown that people with the binge-purge subtype are more likely to engage in substance misuse than those with the restrictive type. They commonly use alcohol, stimulants, cocaine and sedatives. Laxatives, diuretics, and other drugs to induce vomiting are also widely abused.

Research shows that 30%–70% of people with bulimia also have a substance use disorder, suggesting that people with the binging and purging patterns occurring with bulimia have a higher risk of developing a SUD. When someone with bulimia restricts their alcohol use because they fear the calories, they may binge on alcohol.

Approximately 25% of individuals with a binge eating disorder also have a substance use disorder. As with bulimia, the binging and purging pattern has a high relationship with the development of a SUD.

Both conditions present similar addictive characteristics in the diagnostic criteria for binge eating and SUD. With a binge eating disorder, someone binges more food than planned. They continue to binge even though they have experienced problems from binging. They also do not participate in enjoyable activities due to binging.

Treating Addiction and Eating Disorders Together

Due to this strong relationship between substance use disorders and eating disorders, combining prevention work, assessment processes and treatment can help those at risk more effectively. When treatment only addresses substance abuse or an eating disorder, people can spend more money and time on treatment and not appropriately address their co-occurring conditions. Treating providers may not treat one of the disorders when only focusing on the other.

Addressing both disorders within the same setting will offer a stronger and more comprehensive treatment program. This integrated approach can begin with the intake assessment and continue throughout treatment. Patients in care can receive continued monitoring, goal-setting and interventions for changes in symptoms and behaviors as they move through treatment. Limited research has been done to identify the most effective integrated approach for treating addiction and eating disorders; however, some studies have supported using cognitive behavioral therapy (CBT).

The Recovery Village Columbus offers treatment for addiction and co-occurring mental health disorders. Patients can receive treatment across a full continuum of care depending on their needs and assessment. 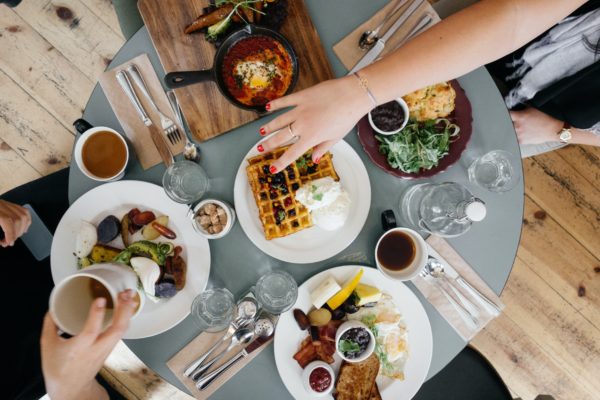 How To Fight Food Addiction

For many people, having a healthy and balanced relationship with food can be a struggle. The correlation between drug and food addiction is only beginning to gain traction in the research community. Addiction can happen alongside other mental health disorders, like anxiety, depression, bipolar disorder, attention deficit disorder or an eating disorder. Here you can find the best information dedicated to the body, mind, and state of well-being. An introduction to outpatient care, IOP programs allow you to build healthy coping skills outside of clinical treatment while affording you increasing independence.

Read More
Editor – Theresa Valenzky
Theresa Valenzky graduated from the University of Akron with a Bachelor of Arts in News/Mass Media Communication and a certificate in psychology. She is passionate about providing genuine information to encourage and guide healing in all aspects of life. Read more
Medically Reviewed By – Sara G. Graff, LCSW
Sara Graff is a Licensed Clinical Social Worker (LCSW) in Florida. She earned both her Bachelor of Arts degree in Psychology and her Master of Social Work (MSW) degree from Washington University in St. Louis. Sara has over twenty five years as a social worker and has worked in many areas of mental health. Read more
Co-Occurring Disorders related topics:
Loading...
Ohio 24/7 Prescription Drug Abuse Hotline Exploring the Four Pillars of Successful Long-Term Addiction Recovery Drug Addiction Hotline 5 Common Types of Behavioral Addiction Preparing for Winter Months in Recovery Fentanyl Rehab in Ohio Ohio Kids Flood Foster Care System as Opioid Addiction Rates Rise How Alcohol Affects Blood Pressure
All Related Topics
Sources

We can help answer your questions and talk through any concerns.